Ayano Aishi, also known as Yandere-Chan or Yan-Chan, is the main protagonist of Yandere Simulator. She also appears in the Dating Sim Crush Crush and in the WiiU game, Super Smash Bros.

For as long as she can remember she only had her eyes on senpai, Ayano was unable to feel anything. She acted like a normal high school girl, but was hiding the empty feeling inside her. One day, she encounters an upperclassman named Taro (or Taeko if selected as female) who sparks an emotion from her. Her mother is Ryoba Aishi, another yandere who has also gone to great lengths to win her senpai's heart, as well as her grandmother. Through she's emotionless, only near her senpai she feels like a normal person, but when she's without him, she is capable to eliminate whatever student that interferes in between the relationship of senpai and her.

While Ayano's personality is dependent on the player, a few independent traits remain. Ayano is obsessed with Taro and believes that she should have him because of how much she values him. She's determined to make him hers, even if it means killing people or ruining others' lives. The player can write her as manipulative at best or sociopathic at worst, depending on her actions. 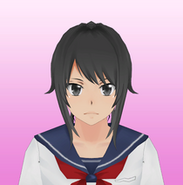 Bloodied Ayano
Add a photo to this gallery

Retrieved from "https://yandere.fandom.com/wiki/Ayano_Aishi?oldid=7948"
Community content is available under CC-BY-SA unless otherwise noted.