Start a Wiki
WARNING: This has spoilers for the anime: SHUFFLE!

Kaede Fuyou is the yandere to Rin Tsuchimi from SHUFFLE!.

Difference From Game and AnimeEdit

Kaede is only a yandere in the anime. In the original source material, she wasn't even attracted to Rin. Even when her route is selected, she'll be completely disinterested in him.

Personality: She is a polite and a modest girl yet she has serious mental issues due to her mother passing. She is very violent and jealous when she is on ”yandere mode”. In her Yandere mode, she attacked Asa because Asa spent too much time with Rin, Which caused Asa to have a heart attack. Kaede had remorse for what she caused and afterward, apologizes to Asa. 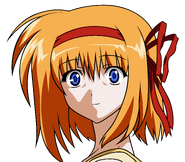 This is how Kaede Looks when she show her "Yandere" side in the chapter 19.

Add a photo to this gallery

Retrieved from "https://yandere.fandom.com/wiki/Kaede_Fuyou?oldid=8376"
Community content is available under CC-BY-SA unless otherwise noted.