Michal is the girl who finds Kaito after he had lost his memories. She's rich, yet desperately lonely. She falls in "love" with Kaito and Michal is desperate that Kaito returns her feelings. Michal also seems to be a sickly girl, collapsing to the floor every time Mikeru appears or disappears, or pretends to be when Kaito is near Lucia (in order to keep Kaito to herself). When she is in sadness or desperation, she gets a headache, and when she is in great sadness or desperation she collapses to the floor, usually paired with Mikeru losing control.

In the anime when Kaito refuses her, her reaction is far different. She is so angry and sad that she starts to break things and cries in her room, singing her theme song. Mikeru appears and tries to convince her to give her lonely and suffering soul to him, with no success. Rihito attempts to restrain her, but she fiercely rejects that and starts arguing with her brother, resulting in her slapping him, telling him she is not his 'little doll', and running away from home.

Kaito finds her half in the water, and runs towards her to save her. Michal is happy with this, but when she, once again, is confronted with Kaito's feelings, she walks away from him, refuses to listen to any word, and screams.

In the manga, when Kaito states that he loves only Lucia and could never love Michal the way that she "loves" him, Michal takes off her clothes and offers herself to him in desperation of keeping him; Kaito turns away from her and leaves. This is a large trigger for her sickness and she collapses. When she falls asleep, Mikeru appears to her and tries to convince her to give all of her to him. Kaito saves her before she takes his hand and accepts his offer. When she wakes up Kaito is with her, but he leaves immediately to 'tell Rihito she woke up'. She begs Kaito to not leave, but he closes the door anyway, allowing Mikeru to once again appear before her. When Kaito shows up again, Mikeru enters Michal's body.

Michal is always crying because of how lonely she was. After she met Kaito, she claimed that he let her have hope again. When Lucia came into the picture, Michal developed a possesive and manipulative character, always clinging to Kaito's arm and pretending to be sick whenever Lucia and Katio were together. Michal seems to think that Kaito was hers just because she rescued him.

On episode 34, when Michal pretended to be sick when Kaito was with Lucia, she clung to Kaito and developed her "crazy and hysterical" act, saying that Kaito belongs to her, she'll die if he leaves her, and so on. Towards the end of the episode, when Kaito was trying to tell her about his feelings, she refused to listen.

When Michal was reborn, she is no longer lonely, physically, or mentally sick. She is now very cheerful and happy, at the cost of forgetting about everyone except for Rihito, her brother.

Michal has short brown hair and eyes plus rather pale skin due to her sickness. If she weren't sick she would probably  have tanned skin and not be so petite. 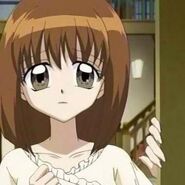 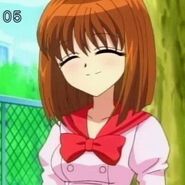 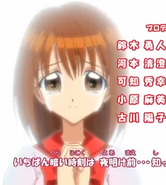 Add a photo to this gallery
Retrieved from "https://yandere.fandom.com/wiki/Mikaru_Amagi?oldid=6436"
Community content is available under CC-BY-SA unless otherwise noted.