Yukako Yamagishi is one of the characters in the fourth part of Jojo's Bizarre Adventure, Diamond is Unbreakable.

She was struck with the Arrow by Keicho Nijimura, which is how she obtained her Stand, Love Deluxe.

When introduced, Yukako has an obsessive love for Koichi. She even went as far as kidnapping him and attempting to brainwash him into loving her, not to mention forcefully training him into becoming an idealized picture of himself. She also attacked a female student with her Stand by letting her hair burn after interrupting Yukako and Koichi's moment together.

Yukako in the manga. 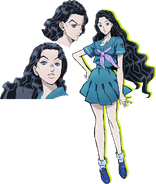 Key art for Yukako.
Add a photo to this gallery

Retrieved from "https://yandere.fandom.com/wiki/Yukako_Yamagishi?oldid=8826"
Community content is available under CC-BY-SA unless otherwise noted.